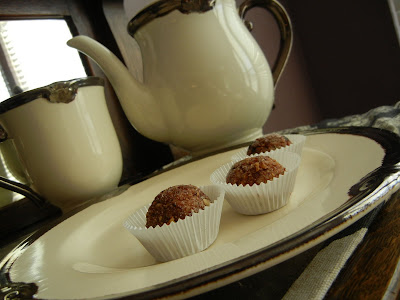 It occurred to me how nice it would be to have the tidiness of a truffle and the taste if a cinnamon roll combined into one. As you know by now I love the convenience of using cake scraps in a multitude of ways. I think I may need to explain “cake scraps” again, though. Cake scraps are not left over cake after it has been partially eaten. They come from the piece cut off the top of the cake to to level it before icing. Speaking of needing a thorough explanation...almost ten years ago when I first realized I loved baking I went on a spree of making nearly every recipe in one of the old Hershey’s cook books. I probably made a cake, a pie, a batch of cookies or brownies two to three times a week for no other reason than to try the recipe and just learn to bake. During this fledgling baking phase I was making a dessert for my family and boyfriend at the time to follow our supper. It was something like a five layer torte, so, I was pretty proud to present it. It looked like the picture and it had taken me several hours to create this new-found masterpiece. As each person bit into the torte my excitement wilted with the strange grimaces that wiped over their faces. I soon discovered upon taking a bite myself that in one of my novice blunders it did not even occur to me to make a 1/4 of liquid coffee then add it versus mix in 1/4 cup of coffee grounds. By the way, this recipe calls for liquid coffee.
You will need:

Mix cake scraps, cream cheese, coffee, butter, caramel, and cinnamon by hand in a medium mixing bowl. Do not over beat.
Spoon dough to roll into balls on a cookie sheet covered in wax paper. Note: each dollop should be about an inch in diameter or a little smaller than a ping pong ball. Refrigerate for 15 minutes for dough to become firm enough to shape into balls.
Toast topping ingredients.
Remove dough from refrigerator and roll into balls.
Roll balls in toasted topping.
Return each ball back to the sheet of wax paper. Place in a sealed freezer-safe container until serving. Present truffles in mini baking cups make for individual servings.
Yields approx. 20 truffles, feel free to double or triple the recipe according to your needs. 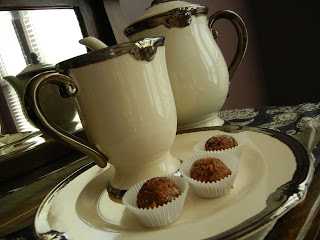 Email ThisBlogThis!Share to TwitterShare to FacebookShare to Pinterest
Labels: Baking and Cooking