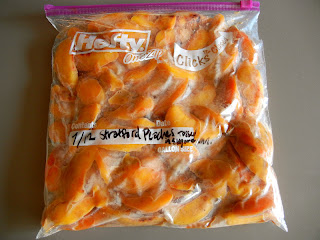 I always had this notion that preparing peaches for the freezer was a long and intensive task. We bought some incredibly juicy, mouthwatering Stratford peaches about a week ago and I was coming to the realization that these wonderfully delicious little gems were going to go bad before I had the chance to make a pie if...I did not freeze them. Left with no other alternative I had to understand what the task at hand was going to involve...to the internet I went.

First you want to prepare a larger sauce pan with boiling water deep enough to cover one peach, a medium to large bowl filled with ice to cool your peaches and a surface you can place the peaches on following the ice bath i.e. a cutting board or cookie sheet.

I learned to first cut an 'X' at the bottom of each peach. In the process I noticed if I cut the 'X' deep enough to reach the pit the peach meat would fall away form the pit with ease. 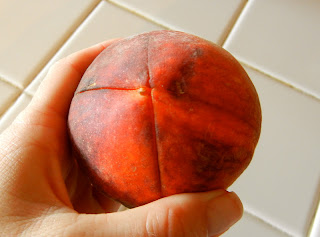 Next, you want to place the peach in boiling water for about 20 seconds. Much longer and the skin begins to disintegrate into a mush that is difficult to pull off in one piece. Use a handled strainer or slotted spoon to remove the peach from the boiling water. 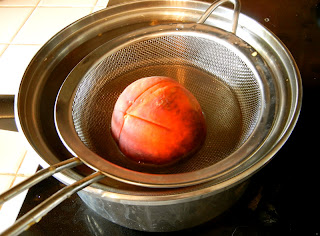 Move the peach to your ice bowl and allow to cool as you boil the next two or three peaches. 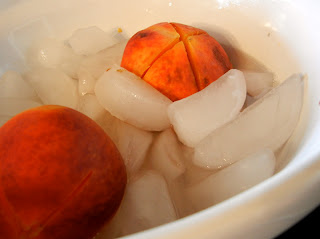 When the peach has cooled to the touch begin pulling the skin at the points of the triangles. It should pull away with very little effort. After peeling the skin continue the cuts all the way around, which should allow the meat to break free from the pit with ease. 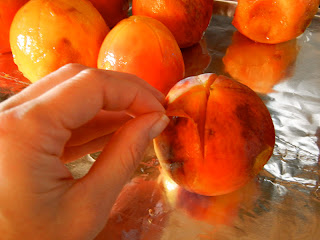 I sliced them, tossed them in sugar and spices, bagged, labeled and dated them so they would be ready for a pie when I am. 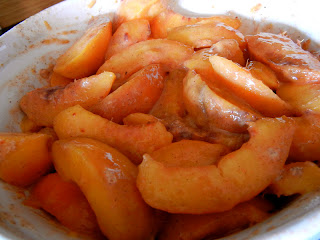 Voila! I couldn't believe I have been avoiding making peach pies all because of a process that was actually so easy!

Posted by The Dainty Domestress at 4:00 AM No comments: