Sometimes You Must Improvise With Last Minute Decorations 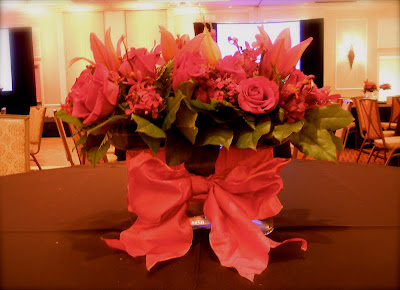 Last week I was co-chairing the decorations, on a very limited, non-profit budget, for a Red Cross event. A local florist, Tony Foss, was kind enough to donated two sizes and styles of floral arrangements. Our original intent was that certain arrangements were to be placed on certain tables, but once it was set up we knew the layout must change. It just did not look good that way. So the improvising began. The large arrangements were already lifted high into the air by large glass vases appearing as pedestals, which then made the small arrangements drown into the center of the table overshadowed by glasses and plates. One of the other ladies mentioned that she had some small glass vases so that we could raise the arrangements. The Skivin events staff and I began rummaging through the hurricanes and vases in their back room. We raised center pieces to various heights and they all looked lovely. However, as we were finishing we faced a new challenge. Three tables had two small centerpieces placed closely together to appear as one larger arrangement. Each piece included the flowers and a styrofoam floral block secured to a salad-sized plate. Because of the plate there was no getting around placing them on separate pedestals. In that case three is better than two, right? We placed three small cylinder vases side-by-side and set the plates on the outside vases. I then took a large ribbon and tied a pretty bow encompassing the vases, as you can see above. This allowed the vases to read as one oblong glass vase. It was a quick fix that looked beautifully with the other varieties of arrangements visible below. 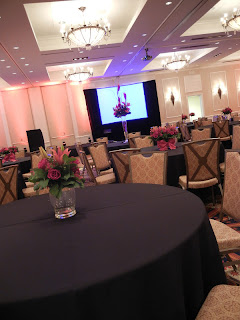 Placing flowers individually into each vase may work better for trying this idea at home. Try to fill the vases with large blooms like hydrangeas for a look that reads as one large arrangement or single stems will also look nice in sets of threes.

Posted by The Dainty Domestress at 11:27 PM

Email ThisBlogThis!Share to TwitterShare to FacebookShare to Pinterest
Labels: Miscellaneous