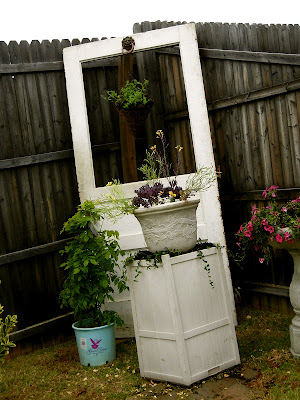 Oh the things that can be accomplished with such little cash! Okay, so it is not a grand English garden...yet. But it is a whole lot better than what it was: a bare corner with a crooked fence post and an ugly gas meter. We have not really set aside a budget for our outdoor spaces. We want them to look nice and be functional for entertaining, but we only seem to work on them here and there as we can.
The awesome vintage door was found at an auction or estate sale years ago. It formerly graced the entry to a business in my little hometown in southwest Oklahoma. I removed the half round with a hammer and ejected the glass before this seasons first hail storm did so for me. Next I remembered a lion’s head knocker that I had bought when we moved in. I thought I would look great on the front door only to find out there was no place for it. So we placed it above the window hole to support a hanging pot. My husband and I then propped the old door in the corner of the fence to cover the bent piece of fence paneling. 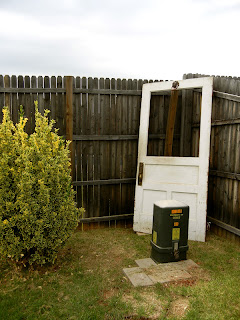 In all actuality I am not sure of the legality of this next part, but do not see why it would be a problem since it is removable. I found this trash can tossed to the side of the street on big trash day. I immediately saw a free planter. The trash can in its initial state did not fit over the meter, so, we had to bust off one side to slide it on. 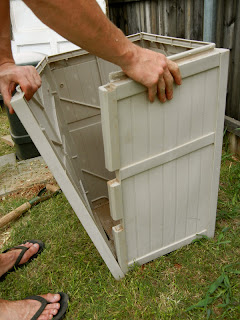 It then needed some height so I moved a pot filled with kale and pansies to rest on top of the up-side-down trash can...also a hand-me-down pot. 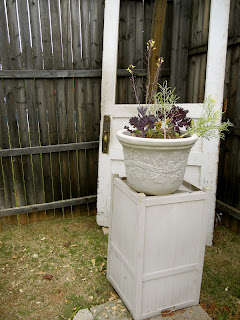 That looked nice, but needed something more. I filled the shallow trough with potting soil and periwinkle vines. That did the trick. 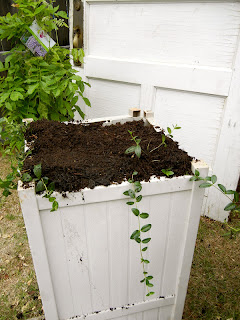 Next I needed another level. We found this bird feeder at Lowe’s when shopping for plants. It was the last one and the base was chipped. They made us a great deal on it, and that is why I am a loyal patron. I had been watching a DIY backyard show earlier in the day about turning bird feeders into tiered planters. That was what I originally set out to do, but I needed that pot’s height on the trash can and then a stair-step down to another level. Although I do love birds I thought we all might enjoy this bird bath more as a planter. 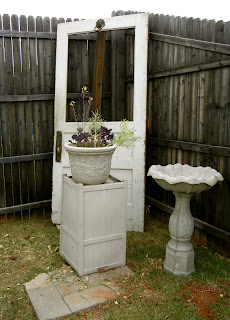 Back to the door...I needed a pretty hanging basket...a nice color that would contrast with the door. I also found this one at Lowe’s. It was not really a “hanging” basket per-say, but it was simple to turn into one. This was one of my more expensive purchases at somewhere around $15. I had wire coconut shell lined baskets I had purchased at Dollar Tree last year, yes, for a dollar. I removed the suspension chains from the baskets and attached them to this new one. 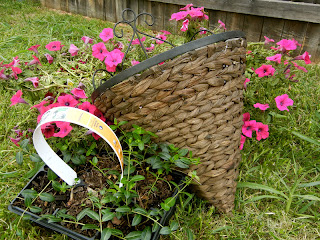 I filled the basket with a six pack of petunias I bought for a dollar on the half-off rack and suspended it from the knocker. 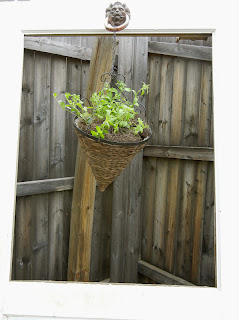 Voila! Our little weekend adventure turned out quite nice. As soon as Okie dig plots our gas lines we will plant the wisteria vine that will eventually grow around the door and fill the empty spaces. 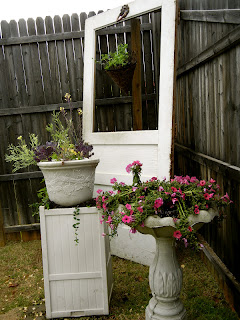 Email ThisBlogThis!Share to TwitterShare to FacebookShare to Pinterest
Labels: Repurposing